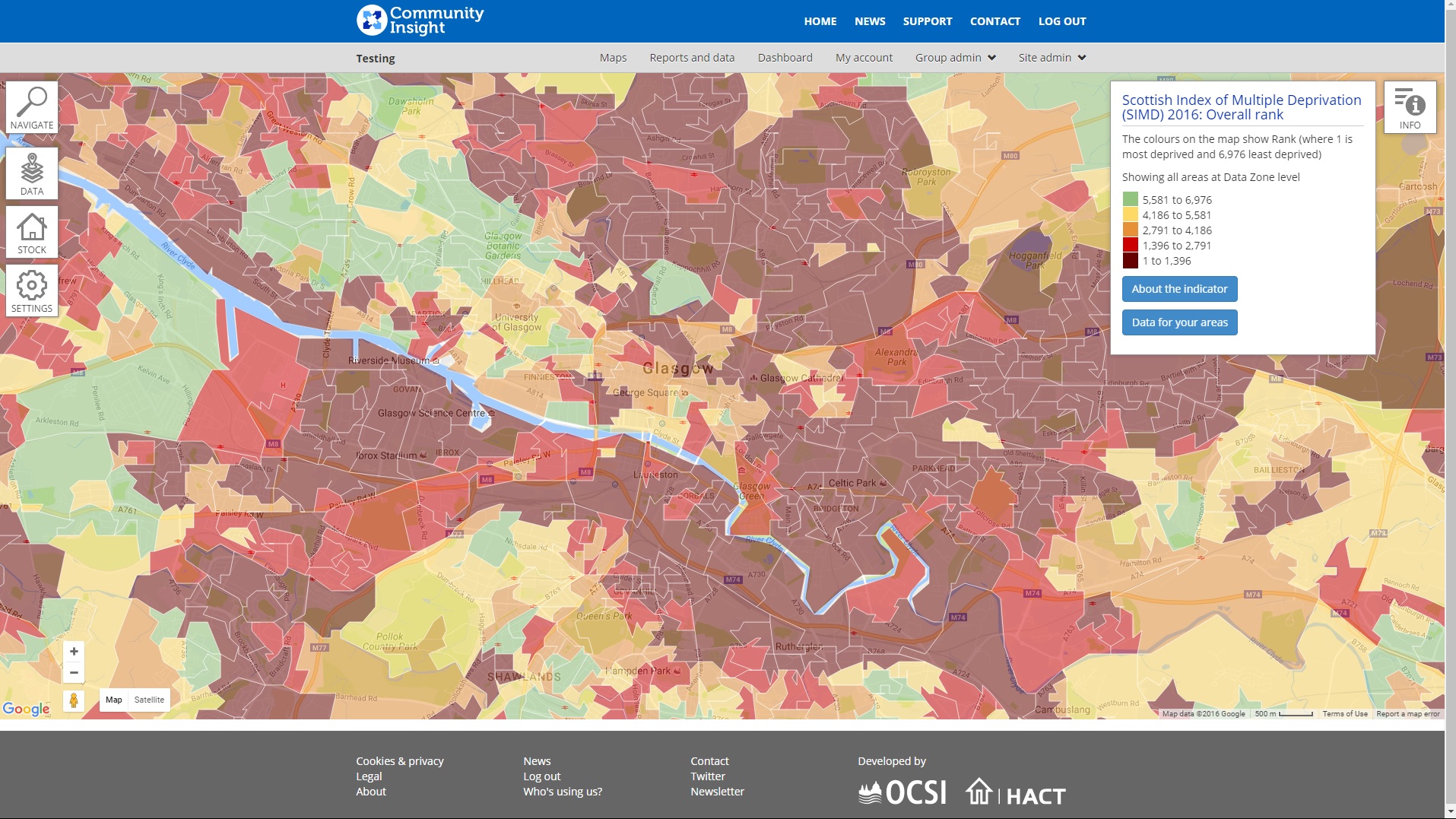 ‘Multiple Deprivation’ is designed to capture a multi-faceted concept of deprivation, recognising that disadvantage is not just related to being low income but also about access to employment, health, education, housing and services. Like the English Index of Multiple Deprivation (IMD), in SIMD this is measured through seven separate domains of deprivation, made up of multiple indicators, as well as a combined score. Data is collected for small ‘building block’ areas of 500-1000 people (data zones) and then summed to create statistics for larger areas. Each small area is then ranked, based upon these combined scores. This allows us to view the ‘most’ and ‘least’ deprived areas relative to others. The most deprived area in Scotland, Ferguslie Park in Paisley, led the national media coverage while local news organisations tended to focus on patterns of deprivation in their area.

For the data geeks among us, take a look at the information box at the bottom of the blog for more details on how the SIMD was constructed.

What are the findings?

Since the release of SIMD 2016 commentators and analysts have been looking at the data to identify changes, key facts and trends. Public Health Scotland have produced a great summary of SIMD data and policy context, which includes their summary of some of the headline statistics from SIMD 2016:

When mapped, SIMD data provides a fascinating insight into patterns of deprivation in Scotland. Below is a deprivation map of Edinburgh by Alasdair Rae (you may have seen some of Alasdair’s visualisations from the English Indices of Deprivation. If not, they are worth looking at and you can see them over on our resource site).

Areas in the most deprived 10% band (decile) are highlighted red and those in the least deprived decile are blue. As might be expected, the city is relatively blue although there are pockets of deprivation: Via Alasdair Rae; depicting most and least deprived areas of Edinburgh.

In addition researchers have created interactive maps that allow you to explore the data yourself and see your own area. The ‘official’ SIMD map, produced by Oliver O’Brien, maps deprivation results to buildings, resulting in a map that highlights high-density urban areas. While appearing relatively bare at the national level, when we ‘zoom in’ this mapping style is excellent at portraying street-by-street deprivation and is quite visually striking: As an alternative visualisation, it’s worth taking a look at this map created by James Trimble, which allows you to view deprivation by individual domain as well as overall. For example, this allows you to explore how different types of deprivation affect urban and rural areas.

These maps provide unique ways to visualise the layout and concentration of deprivation across Scotland. As the SIMD is published as government open data, it is free to obtain and explore yourself – get the data (and associated reports).

Similar to its English counterpart, the Scottish IMD is used by local and central government policy makers to target funds to the communities most in need. Here, we wanted to share a few real world use cases that highlight the ongoing relevance of SIMD.

At a central government level Scotland has targeted deprivation through a series of policy measures. These have ranged from Social Inclusion Funds and Community Regeneration Funds allocating hundreds of millions of pounds to the 15% most deprived areas to the ongoing Regeneration Capital Grant which supports locally developed regeneration projects in deprived areas. A 2008 initiative set out government aims of improving incomes (and outcomes) among deprived areas and deprived populations. SIMD is thus widely used for annual monitoring of health inequalities, in setting new targets (e.g. “by 2018, every nursery in the most deprived areas will have an additional qualified teacher or childcare graduate”), as well as allocation formulae for as much as 30% of the budget for NHS Scotland and the Affordable Housing Supply Programme.

As with IMD England, SIMD is also widely used by local government in Scotland to determine deprived areas for targeting purposes. Glasgow targeted interventions in primary schools at the most deprived postcodes as well as roadshows aimed at discouraging smoking in the home. Local Authorities produce SIMD reports to highlight results in their area, for example this SIMD analysis piece from West Dunbartonshire which shows the distribution of deprivation across the datazones in the authority.

Finally, SIMD is widely used by independent researchers, particularly focusing on health and environmental inequalities. Studies over the last few years have included:

Statisticians have used the SIMD to analyse changes in deprivation in Scotland over time by comparing between editions. This has brought different trends to light. One observation concerns the remarkable persistence of pockets of high deprivation in some Scottish areas. Just as with Jaywick in England, Ferguslie Park in Scotland was also the most deprived area in the previous edition of SIMD. The Scottish government’s briefing notes that 7 areas in Glasgow have consistently been in the top 5% deprived areas since SIMD 2004. Bill Munsie suggests that in some cases in Glasgow, such as the inner east end, “the same areas have been in poverty since Scotland first became heavily industrialised in the early 19th century.” This persistence starkly illustrates the structural nature of poverty and deprivation in the UK.

However, another trend observed in official analysis of SIMD 2012 was that high deprivation was becoming less concentrated over time. The share of the 5% most deprived areas fell for the top 6 local authorities with each edition of SIMD.

Applying this same method to the results of SIMD16 however we see what looks like a reversal in this trend:

In 2016 the national share of 5% most deprived areas has increased for 5 out of 6 of the authorities with the highest results, with North Lanarkshire’s share of the top 5% areas doubling from 4.3% to 8.6%. After declining successively from 2004 to 2012 the top 6’s share of the 5% most deprived has increased to 75.9%. So suggestions of decreasing concentration of deprivation in Scotland remain to be seen. For the most part it remains highly concentrated, particularly in Glasgow. A third phenomenon that has been suggested is the ‘suburbanisation’ of deprivation. Rising property prices within city centres are thought to push disadvantaged people outwards in search of cheaper places, leading to gentrifying inner city ‘core’ areas becoming more affluent and outlying areas becoming more deprived as their demographics reflect this. Jon Minton and Nick Bailey make this argument, claiming that poverty has become more ‘suburbanized’ in all four of Scotland’s major cities over the past 12 years. They point out that rates of income deprivation have decreased in these city centres since 2004 This would mirror a phenomenon previously observed in England, for example in this Guardian datablog piece looking at London. As pointed out by Jon Minton and Nick Bailey, writing for Scottish regeneration network SURF, if deprivation in Scotland is indeed ‘going suburban’ there are implications for the welfare of deprived households, as well as more general social cohesion.

These examples show how analysis of changes in SIMD over time can potentially shed light on emerging trends which are highly relevant to those involved in governing towns, cities, and the country as a whole.

Examples of uses of the IMD resource site (focuses on England): www.indicesofdeprivation.co.uk

SIMD is built out of 28 indicators which cover the 7 distinct ‘domains’ of deprivation.

According to the the technical document (available here) there are three main differences between IMD England and Scotland:

Scotland’s Data Zones, its small area ‘building blocks’, are based on census output areas and designed to have a population between 500-1000 and where possible reflect physical boundaries and natural communities. More information is available in this Scottish Neighbourhood Statistics Guide.

The weightings for SIMD domains are a little different to IMD England. The SIMD technical document shows how this affects the overall impact of each domain on the combined score (p.7).