The early impact of COVID-19 on ‘left behind’ neighbourhoods

Analysis of the early impacts of COVID-19 has shown that there are drastic differences between different groups and communities, including widely reported analysis on the disproportionate impact on BAME groups as well as the impacts upon the most deprived areas

The report builds on our original research with Local Trust on ‘left-behind’ areas. This defines ‘left behind’ areas as those neighbourhoods with the 10% highest need and deprivation in both the Index of Multiple Deprivation and the Community Needs Index.

This new analysis looks at the factors that make communities more vulnerable to COVID-19 (eg. clinical vulnerability and presence of vulnerable groups) as well as the early response and impact to left-behind areas (eg. economic impacts and community response).

A short summary of some of the initial findings below.

The British Red Cross Vulnerability Index identifies ‘left behind’ areas as more vulnerable to impacts of the pandemic than across other similarly deprived areas. 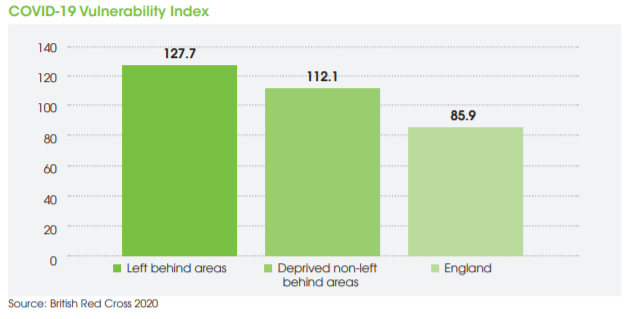 The current mortality rate from COVID-19 is lower in ‘left behind’ areas – though this partly reflects the younger age profile in these communities.

However, there is strong evidence to suggest that the pandemic poses a greater risk to health in ‘left behind’ areas for several reasons: 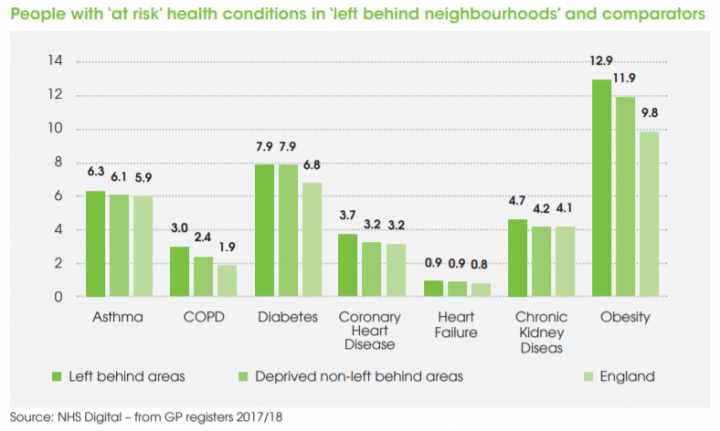 ‘Left behind’ areas are experiencing notable economic impacts arising from the pandemic and subsequent lockdown.

‘Left behind’ areas have a relatively high proportion of vulnerable communities who are likely to require additional support.

Despite all of these factors, there is less evidence of a strong response from the voluntary and community sector in ‘left behind’ areas 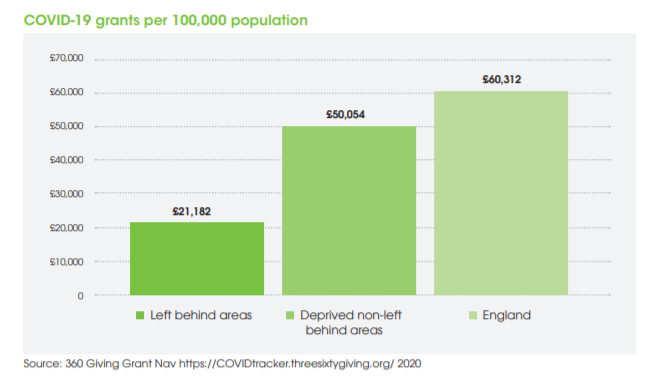 This is at one level unsurprising, as these areas have been identified as ‘left behind’ in part due to the relative lack of community and civic infrastructure. However, it highlights the additional challenges these communities face in responding to the heightened social, economic and clinical challenges posed by the pandemic.

Read the full analysis at ‘Communities at risk: the early impact of COVID-19 on ‘left behind’ neighbourhoods’ and see ‘Left behind? Understanding communities on the edge’ for the original piece of research into ‘left behind’ areas.