The unemployment claimant count data (released 19th May) provides a strong indication of the early economic impact of COVID-19. Released down to LSOA level, the data is of interest to those looking at supporting communities experiencing economic hardship as a result of the pandemic.

The figures refer to the number and proportion of working-age people receiving benefits payable to those who are unemployed (economically active but out of work) as of 9th April 2020, compared with unemployment levels on 12th March 2020 (the last reference period before the UK went into lockdown).

You can access the indicators on which the analysis is based through:

The latest unemployment data is also available in Local Insight, our mapping and reporting platform with more than 1000 local level datasets for the areas you care about (whether that is towns, wards, constituencies or parishes).

Read our guide to unemployment data for more information on understanding some of the economic impact of COVID-19.

The headline figures are striking, with the largest single monthly increase in recorded unemployment – 850,000 new claimants across the UK (an increase of 66%). This dwarfs the second largest increase in the last 25 years, which occurred during the global financial crisis of 2008/2009 – where unemployment rose by 177,000 across the UK (14%) between January and February 2009.

Our initial analysis below focuses on the Local Authorities, towns and MSOA neighbourhoods that have experienced the largest increase in unemployment over the last month – identifying unemployment hotspots where people are more likely to be experiencing financial stress.

The table below shows the 10 Local Authorities across the UK with the largest percentage point increases in unemployment between March and April 2020:

Nine of these are located in Local Authorities containing seaside resorts, which indicates the economic impact of COVID-19 on hospitality and tourism industries.

Furthermore, this corresponds with the findings of the Business Impact of Coronavirus (COVID-19) Survey (BICS) conducted by ONS which reported higher rates of furloughing and job losses in accommodation and food services and arts entertainment and recreation industries. 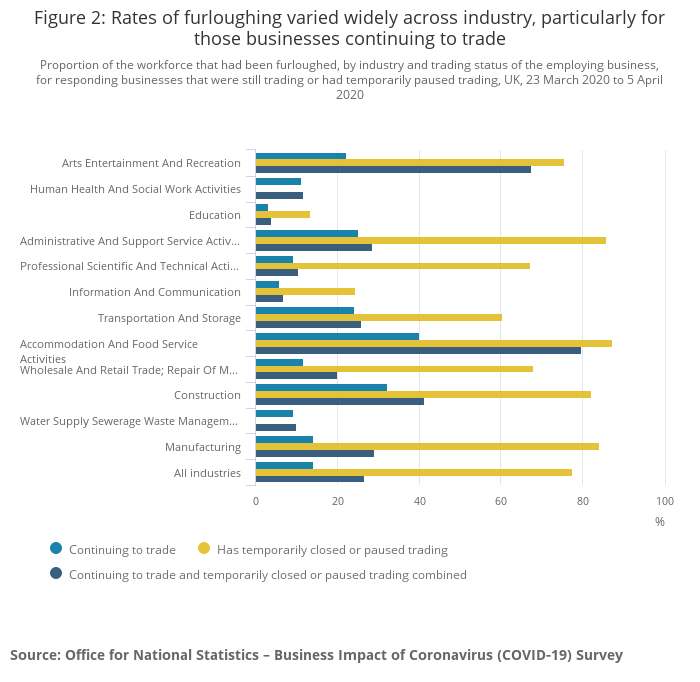 At the other end of the spectrum, areas with a strong knowledge economy have been less impacted, with Cambridge seeing the smallest percentage point increase in unemployment 0.9. Again, this reflects the furloughing trends identified in the BICS.

Drilling down to settlement level, we can see that smaller seaside resorts dominate the list of areas that have seen the largest percentage point increases in unemployment.

The table above shows the 10 settlements (villages, towns and cities) with the largest percentage point increases in unemployment between March and April. Seven of the 10 settlements experiencing the largest increases are found in Cornwall, and each of the 10 areas are coastal or located close to the coast – providing further evidence that coastal economies have been particularly badly affected by the pandemic.

Coastal areas now feature predominantly among the unemployment hotspots of the UK. The table below shows the 10 MSOAs/Intermediate Geographies with the highest overall unemployment rate (proportion of people receiving unemployment benefits):

However, the impact of unemployment is being widely felt across the country with every MSOA/Intermediate Geography neighbourhood in the UK seeing an increase in unemployment between March and April.